That Time When Excite Almost Bought Google For $1 Million

When Excite Turned Down Google

It’s one of those crazy stories that we just don’t hear about enough. But Excite was just one meeting away from buying Google for just a million bucks back in 1997! Watch our interview about it here:

The worst business decision in modern history is generally said to be one of the following: Decca Records choosing not to sign The Beatles after their audition in 1962, and Apple co-founder Ron Wayne selling his 10% stake for $800 in 1976.

Though both of these decisions were unfortunate on a rather epic level, I consider them to be unlucky, of the subjective nature, rather then the result of poor business decision making. Dick Rowe, the A&R rep from Decca who turned down the Beatles, famously said: “We don’t like their sound, and guitar music is on the way out”. At the time, not many disagreed with him, and the music biz is notorious for uncontrollable factors such as luck and timing. The same goes for Wayne. He sold his stake in Apple because he didn’t enjoy working with Jobs and was not passionate about computers. 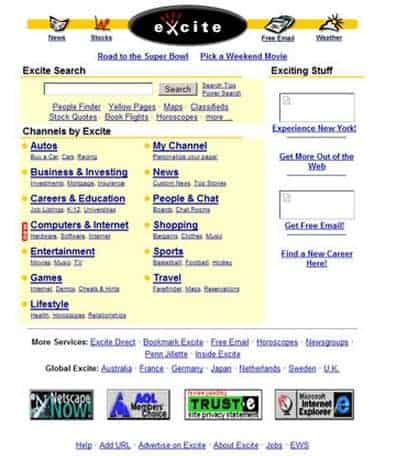 Ultimately however, the reason why Rowe and Wayne should get passes from the “worst business decision ever” list is because their decisions don’t come close to what happened at a meeting between Excite and Google, over 16 years ago.

The year was 1997, and two Stanford students had begun to make waves with their curiously titled search engine, BackRub. Portions of the internet world were starting to take notice, and important networking meetings began taking place. Larry Page and Sergey Brin met with Yahoo founders Jerry Yang and David Filo, though the Yahooligans ultimately decided that they didn’t need new search technology. A similar meeting occurred with Alta Vista, but management said no. The penultimate meeting, however, came with the CEO of Excite, may they rest in peace. (Okay, technically they are still alive, but not really).

The soon-to-be-infamous Excite meeting was preceded by another meeting between founders of both sites. Brin and Page sat down with Excite’s founders and showed off some of BackRub’s potential. It was significantly better than Excite’s. With negotiations starting to take place, there seemed to have been a tentative offer from Excite’s VC funders for $750,000. All that was needed was a green light from the CEO. Enter George Bell.

Bell was brought into a room with Page and Brin. The audacious Stanford students fired up two windows, with each displaying their respective search engines. They searched for the word “Internet”.

Google crushed Excite. Excite’s search results displayed Chinese pages in which the word “internet” was stuffed into them. (Black hat SEO in 1997? Where was Matt Cutts when we needed him!?). Of course, Google’s search results showed webpages that explained how to use browsers.

What happened next is rather astonishing. Bell became irritated by the search results.

“It’s too good. People will find what they want and leave.”

The way Bell saw it, he figured that if Excite were to use Google’s superior search technology, users would find their results in mere seconds, and would quickly leave Excite’s portal. Worse search results meant more staying time within the holy portal. I guess PageRank was still a tad bit ahead of its time.

Obviously, the shortsightedness of Bell’s reasoning is beyond jarring. But can you blame him?

I could also say no, he doesn’t deserve all the blame, because of two factors. He shouldn’t have been CEO in the first place- his background was in movies, not tech. Secondly, the business of search had barely started, and Bell clearly lacked any understanding of how to monetize search.

That is why I believe that Bell’s hiring and subsequent decision to reject Google highlights big business’ severe lack of understanding of search, portals, and e-commerce during the early age of the internet. Excite’s journey, from both before and after the infamous George Bell meeting is rather telling:

In 1996, Excite purchased two search engines: Magellan for $18 million, and Web Crawler from AOL for $12.3 million. (These big purchases might have explained Bell’s reluctance to sink another million into a college project named BackRub). In 1998, Yahoo had begun negotiations to acquire Excite for $6 billion. Thankfully for Yahoo, Excite was acquired for $6.5 billion by @Home Networks, a high speed internet cable service provider. (Yahoo didn’t get off that easy though; they sunk $3.6 billion into the first website that I remember using: GeoCities, which is now dead…Although it works in Japan!).

Two years after Excite’s multi-billion dollar merger, they filed for bankruptcy and were dropped by @Home Networks. They were then sold for less than $10 million to iWon, a search portal who attracted users by entering them in a $25 million lottery. Incredibly, the lottery gimmick seemed to have worked a bit, as iWon not only survived the dot com bubble, but were later bought out along with Excite for $343 million by…….wait for it……AskJeeves! Remember them? The search engine with the famous butler who received all types of questions, but gave back the worst answers. 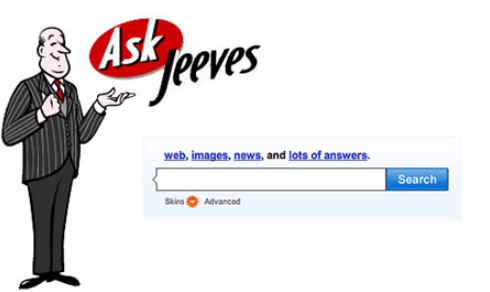 In 2005, AskJeeves was acquired for $1.85 billion by InterActive Corp. Soon after, the corporate bigwigs at IAC fired Jeeves, and renamed the search engine Ask.com. In 2010, IAC’s chairman Barry Diller announced that Ask.com has no value. And now? Ask.com has about a 2% share of the search market. (In 2007, Ask.com sold the European division of Excite to GoAdv for about $4 million.)

What I learned from this entertaining ride of ups and downs (mostly downs) in Excite’s storied journey through mergers and acquisitions in the world of search is this that from before the dot com bubble burst, it seems that no one had any idea of what was going on. Google went around and showed off a clearly superior search engine to a number of potential buyers and were turned down, mostly because the idea of PageRank was almost too revolutionary. Excite, Yahoo, and Lycos (bought for $12 billion in 2000, sold for $95 million in 2004, then sold again for $30 million in 2010!!!) were all portals, whose sole goal was to keep people within their domains. Monetization was still very unclear in the search world, and in a very backward logic sort of way, George Bell was kind of right when he declared that Google was too good. His business was keeping users in Excite’s portal, and Google would have ruined that.

Unfortunately for Bell, Excite’s comparatively weak search engine likely frustrated users into seeking out a stronger one, and Google lay there waiting. Google soon rolled out ad-sense, and they started printing money.

Although Dick Rowe and Ron Wayne made rather unlucky business decisions, Excite and Bell weren’t unlucky at all. In a rather black and white sort of way, they knowingly turned down a superior product, and, as they say, the rest is history.

These days, it’s clear that Google is dominating the competition so badly that it’s a wonder that other search engines even bother. The Bing It On vs Google challenge didn’t even make a dent in Google’s search share.

BONUS: Check out some of these old but good search engine commercials. (Confession: I cracked up from the Excite air conditioner one, and if you’re anything like me, you will too!).